Individuals with Disabilities and Employment Survey

Please consider taking this survey if you are an individual with a disability and meet the criteria below.
Thanks,
McNair


Individuals with Disabilities and Employment Survey

The purpose of this survey is to identify the influences and obstacles that have enabled individuals with disabilities to acquire and maintain part-time or full-time employment.
To participate, you must have a disability AND have been working part-time or full-time for at least 1 year. Your feedback is important, entirely confidential, and completely anonymous.


It is obvious, but must be stated, that we are not talking about questions of morality when we speak of social openness. To illustrate, we are referring to someone talking or talking too loud or standing too close. We are not talking about what might be called “sins” by persons that we now say are no longer sins and then celebrate them.  This is a critical distinction to be made in our current social climate where amorality is equated with morality because either is determined by the social consensus of the moment. For example, racism is wrong in our society... at the moment. But I don't trust our society because it could change because of prevailing events, and people suddenly think that what used to be wrong is no longer wrong. It is not like this has not occurred in the past. Think of the language that has been used to describe our enemies in war. In spite of the fact that there were and are Americans from ethnic groups representing the countries we fought, our language became racist. When there is no immutable moral position based upon truth, one does morality by consensus and consensus changes. Amorality is not what I am talking about.


In contrast, perhaps asociality (as contrasted with amorality) is acceptable, particularly when expressed by someone who hasn’t the ability to know the difference and/act on the difference even when shown to them. Asociality can be annoying because we are conditioned to experience social interactions in a particular way. I can tell you, however, when you spend significant time with people who do not understand typical social behavior, you come to not only find it not particularly disturbing, but actually at times quite refreshing. I recall that the thing that got me interested in disability in the first place was actually that.  In my first interactions with adults with intellectual disabilities there was an openness, a lack of guile, which I found totally engaging. It would be considered inappropriate or strange for me to meet you and instantly tell you “I love you!” or “I hate you!” or even, “You have a big pimple on your nose!” Each of those statements are socially inappropriate according to typical standards and they are entirely wonderful and engaging in their honesty. Honesty, particularly when expressed, is not really socially acceptable behavior, but I love the brutal honesty I receive from my friends with various mental and intellectual impairments. I have grown to enjoy their form of inappropriate social skills over the "appropriate" social skills of others not impacted by disability.


Could the kinds of changes that inclusiveness would bring to the church cause us to develop alternative traditions that would be much more reflective of the commands of God than our current traditions are? I don't know but I am willing to try to find out.
McNair
at 3/17/2014 06:33:00 PM 5 comments:

My wife, Kathi, and I facilitate (along with many other outstanding volunteers), a ministry called the Light and Power Company.  The group meets at Trinity Church in Redlands, CA.  I invite you to visit anytime! A couple of our volunteers, Pat and Curtis Hall, made a video of one of our teaching sessions just so others might get an idea of how the teaching goes in our ministry.

As I review it, there are good and not so good things about it.  Things I am happy with and things I will be endeavoring to change in the future.  But anyway, here is an example of what a typical teaching session looks like in our group.

I welcome any comments or questions.

Kindle version of "The Church and Disability" now available

The Church and Disability is a book I put together, with gleanings from this blog over the first few years. In some cases, postings were expanded and many corrections were made. The idea was to both preserve the writing I have done on this weblog and also make it available in an alternative format. The postings on this weblog are searchable, however, the book form was not.  An index was not even available.  However, with the kindle version, one can now have a searchable copy of the book.  This is something I have been hoping for since the book was originally published. 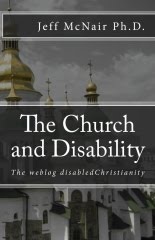 The virute of apathy

Just finished watching the movie "Se7en". I don't necessarily recommend it.  Very violent and dark. However, there is one point where the two main characters Somerset (Morgan Freeman) and Mills (Brad Pitt) are having a discussion in a bar about the killer they are trying to find. Somerset is somewhat discouraged and Mills tries to shake him out of it.

I must agree with Somerset's conclusion about a lot of what we see in society.  Apathy is the path that too many people take. They want simply to be left alone in their homes, in their cars and at work.
Earlier he says,


William Somerset: But you got to be a hero? You want to be a champion. Well, let me tell you, people don't want a champion. They wanna eat cheeseburgers, play the lotto and watch television.

I really do wonder if people want a champion. Someone who not only does right, but someone who is an example to them. I wonder if they want to be spurned on to be greater than they are. I think they are more content to allow others to be the ones who put in the effort and work to love. They may be too interested in their cheeseburgers, playing lotto and watching TV. This is a malaise of all of society, the church included.

Jesus is truly a champion, and we are glad we have a champion, but we don't want to be someone else's champion because of the amount of work it will require. Whatever is worthwhile takes work, on my part and on your part.

I truly think we have become a place that embraces apathy as a virtue. But it is not a virtue.
"...love costs: it takes effort and work."