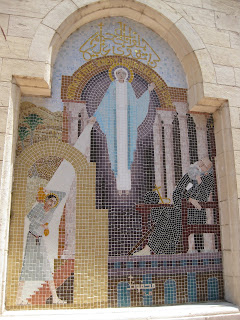 In Cairo, there is a Coptic Christian church called "the hanging church" which is old and absolutely beautiful. In the entrance hallway to the church there are several mosaics depicting a miracle which allowed the church to be built. The story is told that the bishop wanted to build a church. However, the land they owned was on the side of a mountain and could not be built upon. However, the Moslems in the city had plenty of land. The bishop went to the Moslem leaders and asked for some land. The Moslem leader replied that in the Bible, there is the part where Jesus says that if someone has faith the size of a mustard seed, he can move mountains. So they could just ask God to move the mountain if they had enough faith. The bishop was very disturbed. He wanted to believe that through faith he could move mountains, but doubted. He got the congregation to fast and pray for 3 days asking the Lord what to do. In some manner (I don't remember how) God appeared to him in a dream telling him that there was a man in the city who had the faith required to move the mountain (see picture of priest dreaming and him being shown the cobbler). The man was Simon the cobbler. So the bishop found him and asked him to pray that the mountain would be removed. He did and there was an earthquake that moved the mountain! (see picture of the miracle occurring with the sun shining through the crack in the mountain on the left side of the picture) The church was then built. 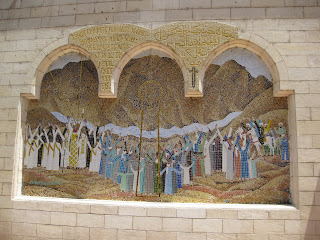 This story struck me in a variety of ways, but what touched me was that God knew who had the most faith in the city, and it was the cobbler, not the bishop or any of his priests. There is a great lesson in this story about faith, and people, and how God sees the world. I have stated elsewhere in this blog that when I speak to my group of friends, many of whom have intellectual disabilities, I do not stand before them as the one with the greatest faith, or the greatest morality. I may have been given the greatest opportunities, but that only makes me all the more accountable for the fact that I am not the one with the greatest faith or morality or love for others. No, I am confident that one of the adults with disabilities has the greatest faith and that causes me to approach all of them in a much different manner. You see the thing that is the most important thing in life, Faith in God, they may have gotten correct. Their complete faith is the stuff that can move mountains. 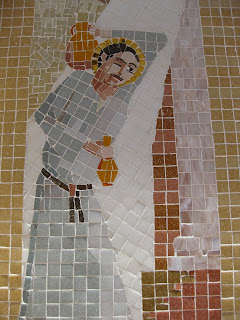 However, the church and too often me as well, focus on things that are NOT very important in God's eyes. (see close up of Simon the cobbler at left) Things like appearance and intellect. My friends with intellectual disabilities would be high on God's list for praying to move mountains, or loving others in a Godly manner. I wonder how far down on the list pastors and church leaders actually are. They might be very embarrassed to find out.

A great story. Thanks for telling it. I am doing research on the needs of families with disabled members. If you are interested I will send you some of our outcomes.

I would be very interested in your findings. Please email me at mail@jeffmcnair.com
Thanks!

Fascinating! For a little more detail, check this out: http://www.copticchurch.net/topics/synexarion/simon-popeabraam.html
More than ecumenical debate may have been at stake.

I am very interested in the use of the mosaics to tell the story. Are there more mosaics displayed? Aew they enough to depict the entire story, or is some supporting narrative required? Maybe in that culture the art was enough?