I was reviewing an article I wrote with Jennifer Baca that was published in 2013. In that piece, we comment on an article by Hutchinson published in 1990. The author describes six new roles for professionals in human services. Here is how we translated those proposed roles.

"A 1990 paper by Hutchison proposed six new roles for professionals in human services.
First, formal services should recognize their limitations for relationship development and rely more on connecting people with informal community groups.
Second, rely less on getting people into programs exclusively for persons with disabilities which rarely lead to development of community relationships.
Third, traditional volunteer programs should be evaluated and changed to be better vehicles for friendship development.
Fourth, attempt to develop more reliance on community members for “services” rather than being completely reliant on paid services.
Fifth, remove segregation in services such that there would be enhanced possibilities of participation with community members.
Sixth, recognize the limitations of human service professionals to actually facilitate friendships, looking instead to age peers, community members with common interests, and others who are already community-connected.
McNair (2008) described the church as playing the role described by Hutchison (1990) in the community. Human service workers would be wise to consider employing churches in their efforts to develop friendships for their clients."
(Baca & McNair, 2013 based on Hutchinson, 1990)

The church offers so much potential for facilitating microcosms of social change, reflecting the direction and vision we have for the larger society in the future. As we embrace inclusion of persons with disabilities in the Christian community, we have the incredible opportunity to demonstrate the way things should be. We can do the six things listed above. We have the potential to not just be relevant in the societal change that inclusion would bring, we could be the leaders.  We should be the leaders!

Hutchison, B. (1990). A qualitative study of the friendships of people with disabilities. In B. J. A. Smale (Ed.), Leisure challenges: Bringing people, resources and policy into play. Proceedings of the Sixth Canadian Congress on Leisure Research, May 9-12, 1990. Ontario, Canada: Ontario Research Council on Leisure. Retrieved from http://lin.ca/Uploads/cclr6/CCLR6-12.pdf

New curriculum on Romans from The Light & Power Company

As many readers of this blog will know, I have taught an adult Bible class at my church on Sunday mornings for the past 27 years. This class is somewhat unique in that it includes adults with various disabilities. I have collected those lessons and at times have made some of them available on the internet.  We are now in the process of publishing the lessons in a series of volumes. This second volume is devoted to the book of Romans. It contains 35 lessons. These lessons were developed, then taught, then revised, then taught again, then revised again. It is now available on Amazon. This Romans curriculum accompanies volume 1 which we published last year on the Psalms. Here are links to the two curricula.
Lessons from the Light & Power Company: Romans
Lessons from the Light & Power Company: The Psalms

If you have followed this blog over the years, you will know that Kathi and I have a very specific approach which is age appropriate treating adults with the respect they are entitled to. The material covered in these lessons are the same types of concepts you would teach any group of adults.

There are also videos to accompany the curricula. You will be able to see how I teach some of the lessons.  A link to a 360' video from the Psalms curriculum is available here. You go to this site and then there is a link there with a description of the video.

So please take a look a the curriculum. It might be useful to you in your ministry. 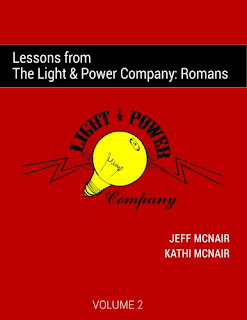 In an article published by Wallin (2004) he discussed categories of social skill deficits, in particular related to the experience of ASD. His categories were

Perhaps at first they are socially indifferent. Maybe they really don't know about persons with disabilities. Because they don't know they are kind of indifferent, not really caring one way or another. But then something happens in their lives where they are confronted with the reality of the experience of disability. Because they are inexperienced or scared or just don't want to be bothered, they then move into social avoidance. They know, but they avoid any involvement. Ultimately, perhaps they cannot avoid interactions with someone with a disability so they move into a phase of social awkwardness. As we have discussed elsewhere in this blog, if I am in a situation with someone with a disability and it is socially awkward, chances are, I am the one bringing the awkwardness to the situation. See  "I bring awkwardness to the situation."The person with the disability is fine. Those three areas are where Wallin left off, and he once again was talking about social skill deficits. But these social skill deficits in those without disabilities may indeed be a progression and perhaps they lead to a fourth category, social involvement. I care now. I want relationship now. I am involved now.

So perhaps it is a progression from indifference to avoidance to awkwardness to involvement. Are you on this progression? Work through YOUR awkwardness and find your way to involvement. People with disabilities are just people. Maybe if you choose one of them as your friend, that person will choose you back.
at 2/09/2018 03:42:00 PM 10 comments: